Daniele Salvalai – “Dystopia of an ascent”

Daniele Salvalai
DYSTOPIA OF AN ASCENT
curated by Carmelo Cipriani

Saturday 8th of December, at 18.30, in Pietrasanta (LU), KYRO ART GALLERY is proud to present the solo exhibition of the Lombard artist DANIELE SALVALAI, Dystopia of an Ascent, curated by Carmelo Cipriani. 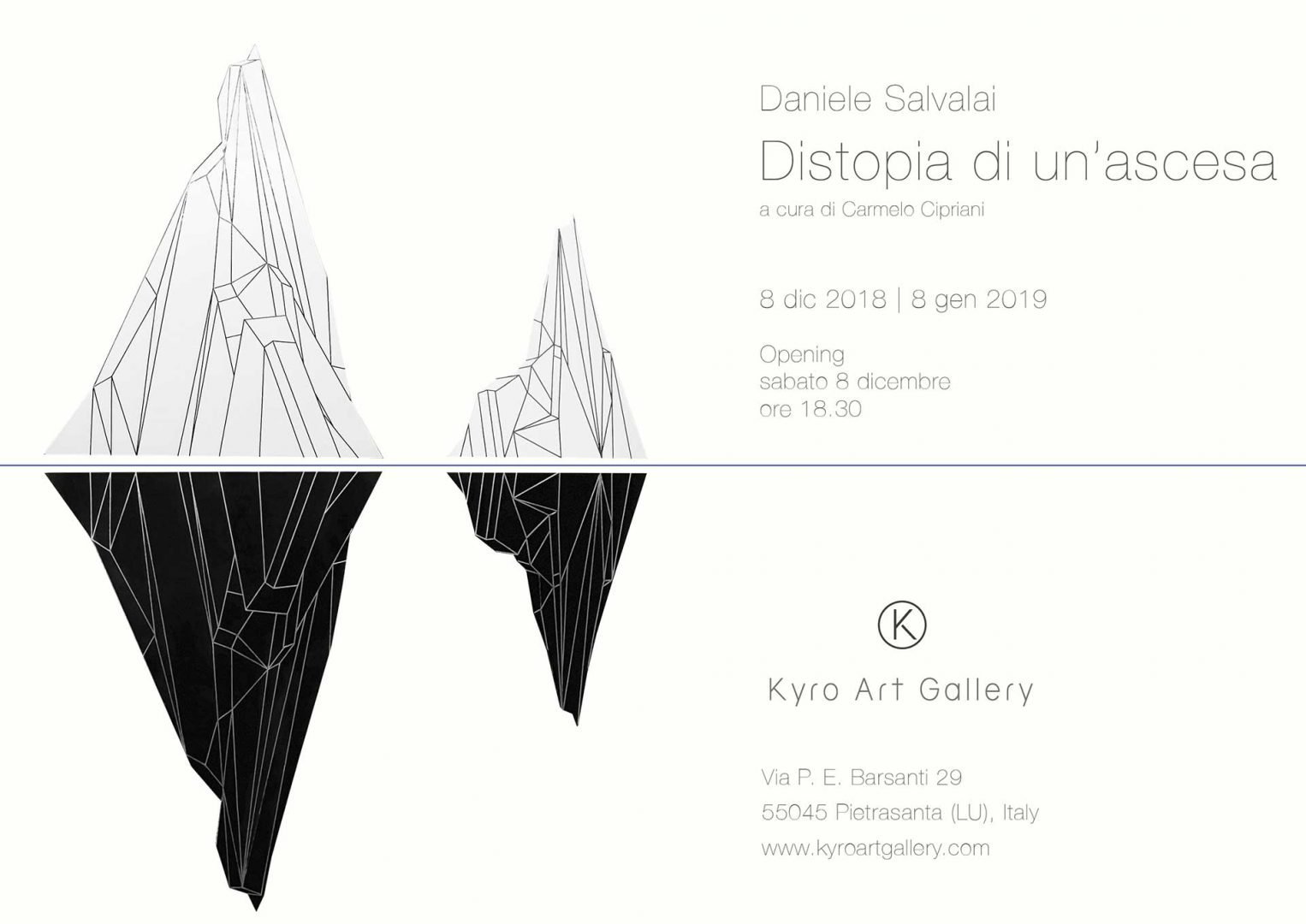 The exhibition is wholly focused on the mountain, taken as a symbol of success and failure, rise and fall. Conducted and developed by the artist for a five-year period, the theme in his research eludes any trivial narrative intent to describe it as a discrepant and thoughtful mimesis of nature, a symbolic reasoning on the existence and on the limits of the human. The narrative and iconographic pretext is the Cerro Torre, the ‘roof’ of Patagonia located on the border between Argentina and Chile. It was defined by Reinhold Messner as “the impossible mountain”, not for the height, but for the summit, which is very difficult to reach due to unpredictable climatic and environmental conditions. The artist has studied the forms, reproduced and dissected them, creating a wide installation, an all-encompassing object poem in which the spectator is completely wrapped. The project represents the last landing place of the artist’s reflection on the forms of nature, understood as living contexts, and on the mountain in particular. Starting in 2012 with a project on K2, this reflection is now transformed into an accomplished installation project, able to bring back to the precise limits of a physical place (the gallery) and what is beyond the physical (the mountain, the emotions of which it is a harbinger, the symbols to which it alludes).
Carmelo Cipriani writes in the catalogue: “The mountain, like the sea, is more than a place, it is a style of living, an identity value. Daniele Salvalai is well aware that in his studio, between the Franciacorta and the Val Camonica, he scans the Lombardian peaks daily. He captures the poetry of the form and the arrogance of presence. He works simultaneously on geometric and natural forms, one reflected in the other, tracing a higher order to which he also tries to bring man back, not as a dominant element but as part of the whole, according to a way of acting and thinking that has always been perpetrated in his region, at least since the time of Most Serene Republic of Venice. Fleeing from mimesis, he is interested in the processes of nature, investigating at the same time the relationship between his body and the reconstructed space; he seeks a dialogue with nature, from which he draws every form whilst the light, marks the surfaces and sharp cuts, it defines the works, transforms them into something different each time. Playing to tell emotional and visual events through a skilful use of matter and light, it reconnects the threads with the narrative vocation of art, suspending it in a dreamlike and poetically reconstructed dimension of reality. Salvalai has elaborated a precise Ubi Consistem in the broad horizon of contemporary expression, choosing to reason about nature, man, and their mutual relationship; he uses the language and materials of sculpture to investigate aspects related to memory and perception, analogies in an analysis that becomes an invitation to confront reality in a new way, with places intended to act as a repository of relationships and tracks. Playing with suspended sensations between the familiar and the perturbing, the personal and the impersonal, discovering the ambivalent nature of emptiness, overwhelming and soothing. In Pietrasanta Salvalai offers a site-specific exhibition that evokes times of memory and of matter, involving the user in a all-encompassing object poem. ‘Dystopia of an Ascent’ presents itself as a journey through intuition, secret memory and metaphorical process. It is a kind of close-up model in which is recounted the symbolic sphere linked to the mountain but also the sculptural process, from the design idea to the execution. First the Tower of Babel, then K2 and today the Cerro Torre, the artist reflects on the ambition of man to reach the top, to ascend to a higher dimension, translating even his body”.

The catalogue will be presented Saturday, December 22nd at 18.30.

Daniele Salvalai
Daniele Salvalai was born in 1979 in Iseo, in the province of Brescia. He graduated in Sculpture at the Academy of Fine Arts of Brera in Milan, where, from 2013 to 2014, he was Professor of Sculptural Techniques. Since 2016 he has been Professor of Sculpture at the Academy of Fine Arts in Verona. In 2009 he created the environmental installation Alveare – Homage to the Ruche de Montparnasse created along the exhibition path of Malga Costa, Borgo Valsugana (TN), for the occasion of “ART SELLA Incontri Internazionali Arte Natura”. In 2012 he created the trophy-sculpture for the winner of the final stage of the 95th Giro d’Italia. In 2018 he signed the trophy-sculpture for the winner of the “Martini International Award”, promoted by the Carlo Maria Martini Foundation of Milan. He has completed many exhibitions, a large number of which were personal, and among which stand out those at the “Antonio Canova” Gipsoteca Museum Possagno (TV) and the Galleria San Fedele in Milan, both in 2012, the exhibitions at the Francesco Messina Studio Museum in Milan in 2015 and at the Museo Collezione Paolo VI di Concesio (BS) in 2017. He has also received many awards: San Fedele Visual Arts Award in 2011; Antonio Canova Sculpture Award in 2011; Cramum Award in Milan in 2013; “Paul VI for contemporary art” award in 2016. He is one of the founders of Resilienza Italiana, a movement of art and culture. He lives and works between Zone (BS) and Verona.